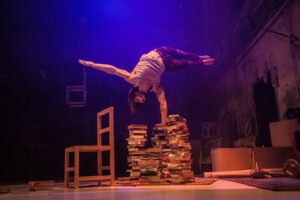 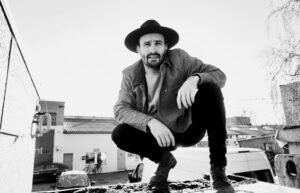 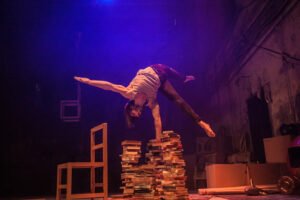 Florian Zumkehr caught the circus virus in a youth circus in Basel and then decided to make his passion his profession. Since graduating from the “Staatliche Artistenschule” in Berlin, he has traveled the world as an artist and performed around 3,500 shows. In this interview, he shares his memories of participating in YOUNG STAGE and talks about his future plans.

How long have you been a performer and how did you get into circus? When did you decide to become a professional performer?
I joined the Youth Circus Bruderholz in Basel in my childhood, like YOUNG STAGE director Nadja Hauser. That’s where my enthusiasm was sparked and has lasted until today.

When did you participate at the festival and how old were you at that time?
That was in 2011. I was 23 years old at that time.

What memories do you have of your festival participation?
I had actually never performed as a professional artist in my home country Switzerland until then, not even in Basel in my hometown. So, it was very exciting to perform in my home country, because all my friends and relatives could come and see the show. Especially the older family members who could not follow me all the way to Canada before. But I can also remember that it was strange for me to go back to the format of just performing one act on stage, because at that time I was in contract with the company 7 Fingers with the show TRACES. So, I was mainly used to perform on stage for 90 minutes.

You played at the festival again in 2019, at the Open-Air Circus Spektakel, in the middle of the city. How has the festival changed from your point of view? That was nice! I’m not a big fan of the idea of competition, although YOUNG STAGE really manages to counteract this competitive thinking strongly. It was a really nice feeling for me in 2019 to see YOUNG STAGE grow for the sake of Circus and not for the competition. I think it’s great that it’s drawing attention to contemporary circus in the city and thus expanding it.

What has been happening since then and how have you been developing?
My main focus is the company ANALOG that I founded a few years ago with some friends. We have our first stage production “FINALE” which we had the pleasure to play in more than 8 countries since 2018. Since this year I am developing my solo show “WILT and Shine” which is about 50 min.

How do you deal with the current situation and how did it affect your planning when the pandemic became real for you? Were you working, creating, touring, what were your actual plans?
It was supposed to be a very full ANALOG summer with gigs at the Edinburgh Fringe festival. But unfortunately, it all fell through. I decided after a few weeks to do something else because I can’t stand waiting in an empty room not knowing what’s going to happen. So last summer I went to an alp in the Simmental and learned how to produce cheese and everything that goes with it.

How do you keep fit at the moment? Physically, but also mentally.
I get up early and do my handstand training as one of the first points in my daily routine. Because it’s not so much fun for me to keep fit at the moment, when there’s no performance in sight. But I recognized that if I just see it as something that has to be done, like brushing my teeth, then it becomes easier. Once I get over with, I’m also mentally fine. Mentally, it helps me working with the director of my solo in the rehearsal room for at least 4 hours a day. That gives the day a certain structure.

What do you expect this year? Do you have any special goals?
I wish that the live entertainment industry recovers soon. Not so much for my destiny, but much more for the whole society to have again the opportunity to consume this beautiful medium. Personally, I wish to finish my solo and hopefully I will have a good alpine summer, because that’s where I’m going to be again this year. Hopefully in October we will go on tour in Germany with FINALE. But I’m still very cautious about anticipating the Germany tour, because the disappointment of a cancellation would be unnecessarily big.

Thank you very much for your time Florian! We wish you all the very best for your future plans!

Any cookies that may not be particularly necessary for the website to function and is used specifically to collect user personal data via analytics, ads, other embedded contents are termed as non-necessary cookies. It is mandatory to procure user consent prior to running these cookies on your website.